Andy Warhol: The Defining Movement of His Life

For as long as man has walked the earth, Art has been a means of communication and at the turn of the 20th century, Art as we knew it began to change tremendously. In the mid 1950's a movement emerged out of the Great Britain, which went against the story telling and emotional aspect of Art, rather, it based itself on the popular culture of society. In North America, this movement made its debut almost a decade later in the early 60's and was propelled by none other than Andy Warhol. This movement would forever be known as Pop (popular) Art. As mentioned earlier, the American Artist, Andy Warhol was one of the most iconic Pop Artist the world has ever seen. The world had never seen subject matter such as his; he took everyday items and transformed them into art. One of Warhol’s focuses was mass production and he achieved this by using the silk screen process; this allowed him to create repetition in his work with little effort. Andy Warhol’s state of mind is quite representative of both pop culture and Pop Art in the 60's, because at that time the capitalist society was beginning to flourish and so did the need to consume more, quickly and with little to no effort. For those who might not know, popular culture is anything that appeals to the masses and that is found in our day to day lives. For instance, in the 60's Coca Cola and Campbell’s Soup were all the rage, today, the term «Hipster», the Nike brand, the book Fifty Shades of Grey are all a part of what the mass of the society considers as being popular. 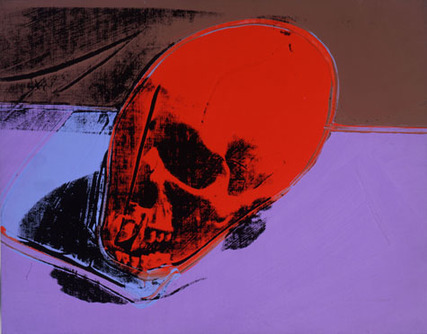 
When we first glance at this silkscreen, the very first thing we see is a red skull resting on a lavender coloured surface in the foreground. There is also a shade of purple acting as the background of this piece. This Warhol piece like many other of his works has little to no movement. The details are what in most cases aid towards finding movement; therefore lack of details in this piece justifies the lack of movement. Furthermore, due to the superimposition and the manner in which the colours are separated depth is created. These separations define the background and the foreground, as well as put into focus the skull as being the main Moreover, the use of the silkscreen creates a texture on the linen once the paint and ink are applied. We see this, when we look at the shading on and around the skull, the texture has a great resemblance to crosshatching, because of the fine and well-defined lines. While, the skull is placed in the middle of the work, one can notice that the mass of the colour is on the right side, which seems to make the image tilt in that direction. However, the fact that black paint was strictly used on the left side of the piece creates heaviness on the left side of the silkscreen. In the end, due to these two elements presented above, it is permissible to say that this Skull has balance. In addition, the black paint used in this piece creates shading, which allows the bright colours to burst out of the canvas and toward the viewer. The bright colours used in this piece are main characteristic of Pop Art. The red colour of the skull can represent power and strength as well as death. Also, the hues of purple used in the background can be associated with prestige and poise. It should be mentioned that the colour purple in western history is a symbol of royalty and red is a symbol of power and blood. Lastly, in this piece the pigments used convey a strong feeling of power that is being lost, all while representing strength and poise. Hence, the subject matter chosen, the skull is a popular representation of death, which could be reason for its selection. 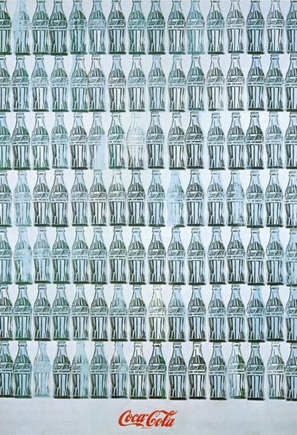 
In 1962, Pittsburgh native, Andy Warhol, created a piece that he entitled Green Coca- Cola Bottles. This painting is composed of 112 empty green glass bottles of Coca Cola, lined up into 7 rows of 16. These bottles are set on a white background. Furthermore, at the very bottom of the canvas there is the coca cola logo that is perfectly centered. Moreover, the space in Warhol’s piece is mostly taken up by the empty green glass bottles. However, the entire negative space in between and around the bottles allow the eye to travel through the work. In this work, there is no movement due to the static repetition of the bottles. The manner in which these bottles are placed, in rows, structure the way the viewer will admire the piece. The eye will follow the rows from left to right and from top to bottom. However, the visual path tends to break when our eye comes into contact with a lighter coloured bottle. Also, the order and structure of this piece is a display of balance. In addition, there is a high visual contrast, between the crisp white background and the cleanly traced green strokes of the empty iconic glass bottle. In fact, the green and white also compliment and intensify the red logo. To further this analysis, one can associate the dark green colour with money and the bright red Coca Cola logo as a symbol of power. In tail, the mood evoked from this piece is more of a message toward the viewer of money and power. This artwork comes across mostly as an advertisement, which representative of the Pop Art movement.

In closing, Andy Warhol and Pop Art set the stage for commercial art. Although, the sixties are long gone the essence of the movement still prevails today. The works of Mr. Warhol and other great artist of that time, such as, Tom Wesselman and Roy Litchtenstein are still very popular today and are constantly being reinvented by everyone and anyone that sees their art. In fact, even the creator of this website was inspired enough to create her own Pop Art piece, with the help of Adobe photoshop and Illustrator. 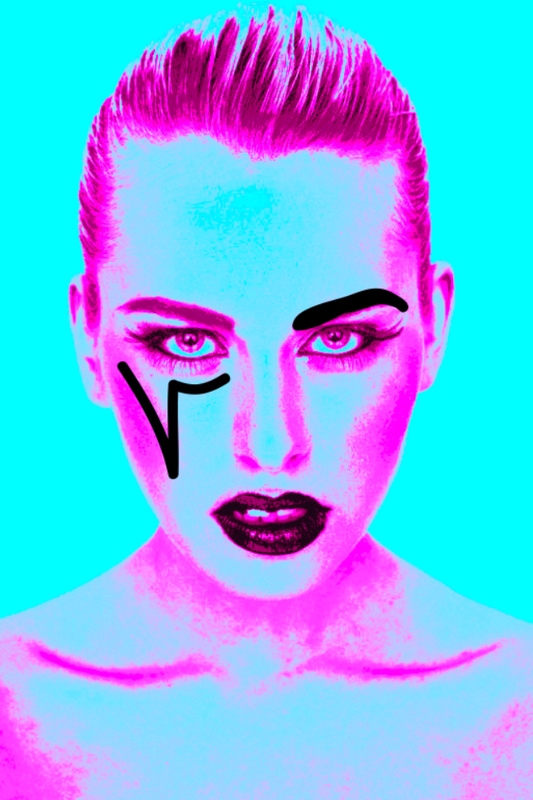 BACK TO top
Powered by